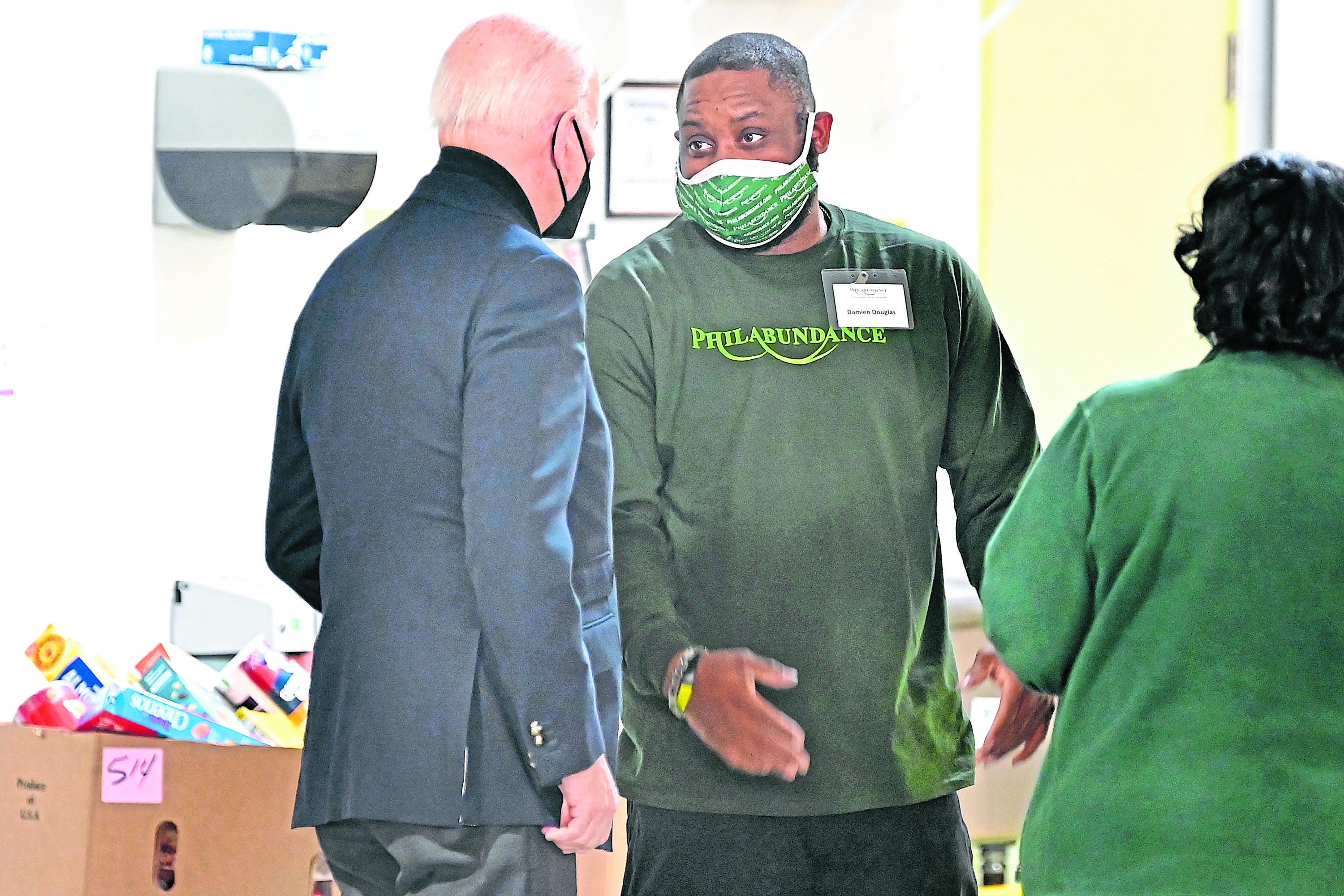 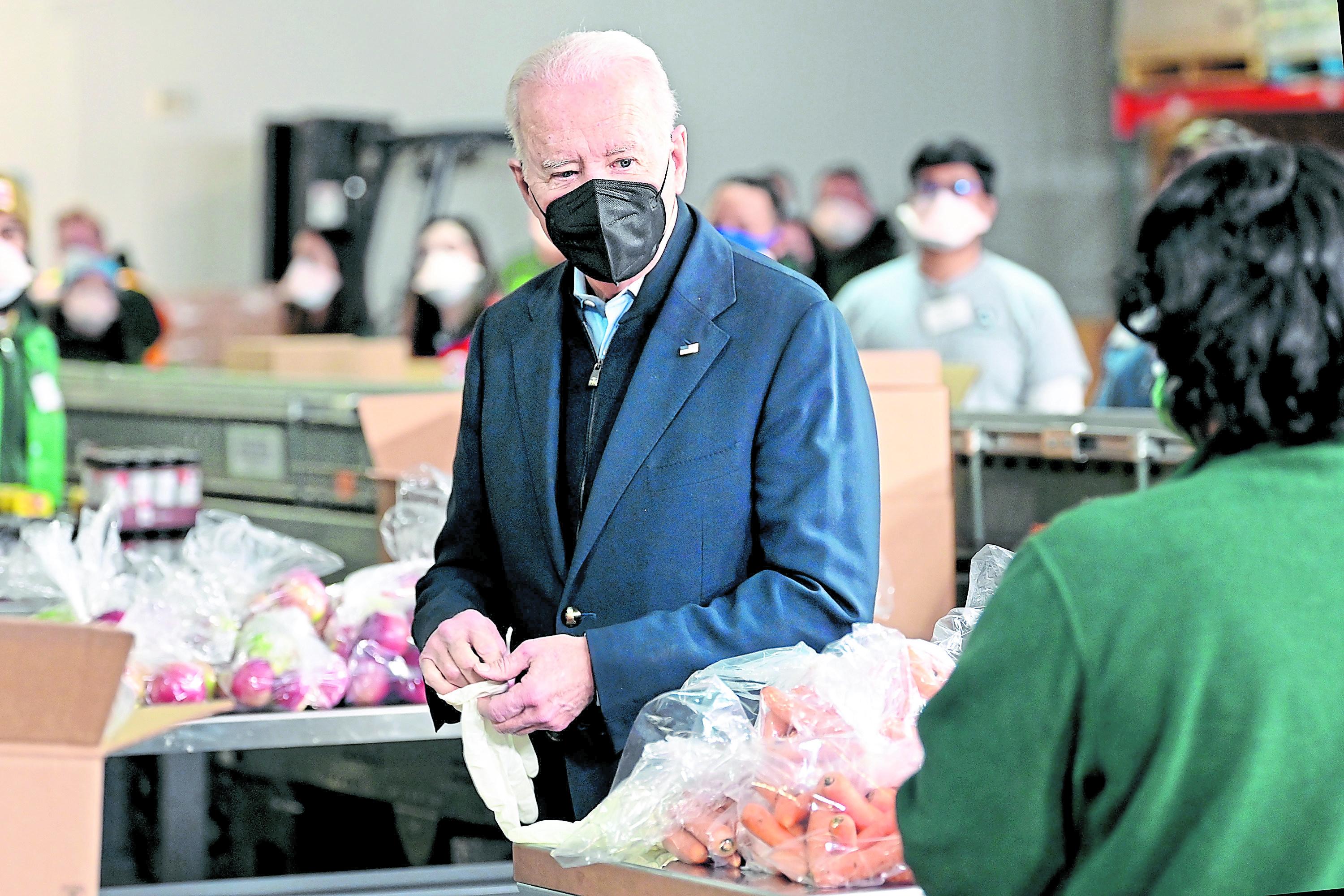 President Joe Biden puts on gloves after arriving Sunday at the assembly floor at Philabundance headquarters in South Philadephia. In all, 500 family meal kits were packed during the Bidens' Philabundance visit. TOM GRALISH / Staff Photographer 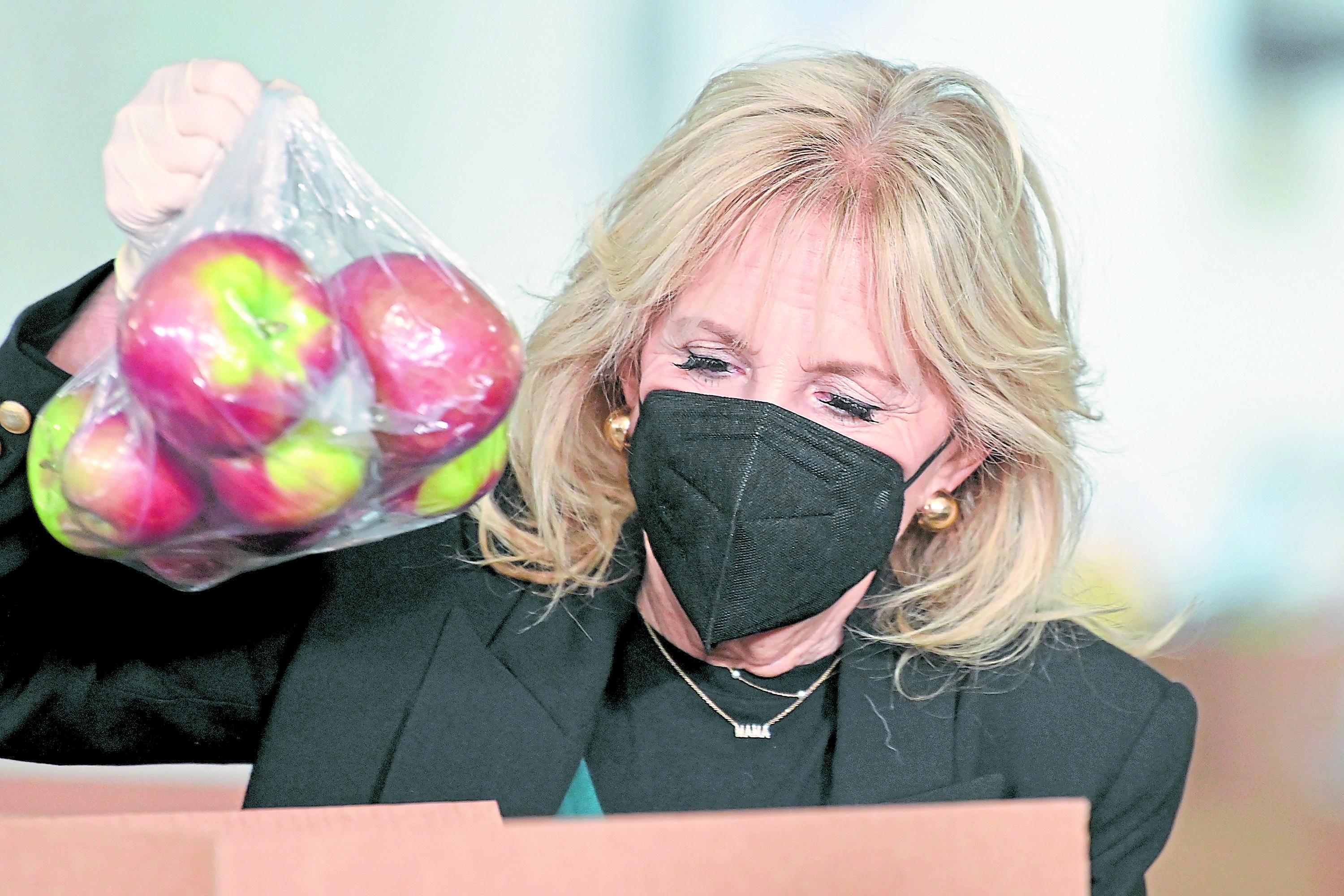 First lady Jill Biden fills family food boxes with packages of apples on the assembly floor at S. Philly's Philabundance headquarters on Sunday. She was there last year, too. TOM GRALISH / Staff Photographer 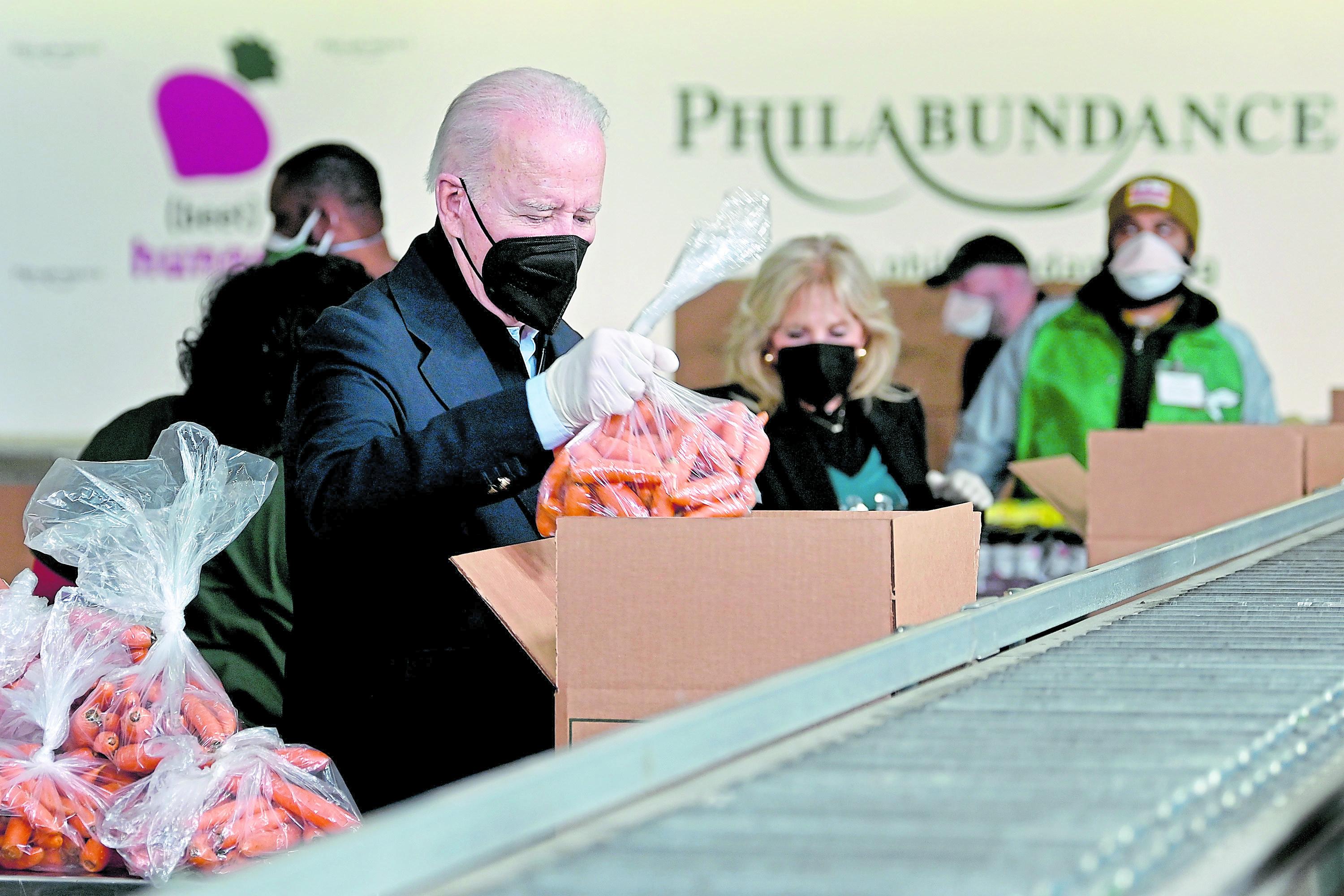 The president and first lady Jill Biden stood at a U-shaped conveyor belt along with others, helping to pack 27-pound boxes of food destined for Feast of Justice food pantry in Northeast Philadelphia and Mid-Atlantic States Career & Education Center Inc., in Pennsville, Salem County, according to Philabundance CEO Loree Jones. She stood beside Biden at the belt in the anti-hunger agency's South Philadelphia headquarters.

While the president placed three-pound bags of carrots into boxes, Jill Biden - wearing an Eagles shirt - was loading same-sized packages of apples.

In all, 500 family meal kits were packed during the Bidens' Philabundance visit.

Jones thanked Biden for making child hunger a focus of his administration. According to Feeding America, the national food charity of which Philabundance is a part, the number of children facing hunger in the U.S. rose during the pandemic - from more than 10 million children in 2019 to nearly 12 million in 2020.

"Those child tax credits really helped a lot," Biden responded. "We've got to get it renewed."

Biden added, "We still have much to do to end hunger in America. The country's COVID crisis has increased a need that was already alarmingly high and has now brought so many more people in need to food pantries, cupboards, and emergency kitchens.

"Recovery for our communities from this pandemic has been difficult and we need to continue to make ending hunger in America a top priority."

When Biden was at Philabundance last year, two days before his inauguration, he made a point of saying he wanted to end hunger in America for children. "Then he expanded SNAP benefits [food stamps] and expanded the CTC [child tax credit]," Jones said. "And for a period of time, it worked."

Expanded CTC payments that kept millions of families out of poverty expired last month without Congress allowing them to continue, plunging many people in need back into a state of indigence, Jones noted.

She said she was moved that the Bidens "would take this opportunity to help feed the food insecure" as the last CTC payments have been made.

"In his first year in office, President Biden has shown great support for the well-being and health of individuals who experience difficulty providing for their families," Jones added.

Biden, born in Scranton, based his presidential campaign in Pennsylvania and has frequently visited the state since becoming president, including events in Pittsburgh, Delaware County and the Lehigh Valley. The state was crucial to his overall victory in 2020.

Dressed in a navy blazer and black sweater, Biden chatted amiably with Philabundance employees, volunteers, and representatives from other organizations, including Michael Smith, CEO of AmeriCorps, the federal service and volunteerism agency. He arrived just after 11:30 and stayed for more than an hour.

Jones said that she was charmed by Biden: "It struck me even more this year than last how engaging and conversational he is."

The Rev. Patricia Neale, executive director of Feast of Justice, was among those who stood across the assembly line from Biden and discussed the pandemic's impact on immigrant communities and workers who relied on the gig economy or restaurant jobs to get by.

Biden asked Neale about the families her pantry, one of the largest in Philadelphia, serves: What foods do they request the most? What do they need?

"It was a little bit daunting. But he's extremely personable and connected into this," Neale said. "He was very interested in promoting the ongoing battle for the child tax credit, and kind of speaking to all of us about how we need to work together, and that he's going to continue to fight for it."

As relaxed and convivial as Biden was, Jones said, it took little prodding to have the president and first lady sing the Eagles fight song that Jones started off.

Afterward, Jones reflected on a pair of presidential visits she'll not soon forget: "For two years in a row, to have the president of the United States do that humbling act of service with us - it was just incredible."