Renters in Philly Sound Off in Survey
Many say they are behind in rent or fear repercussions of past evictions. 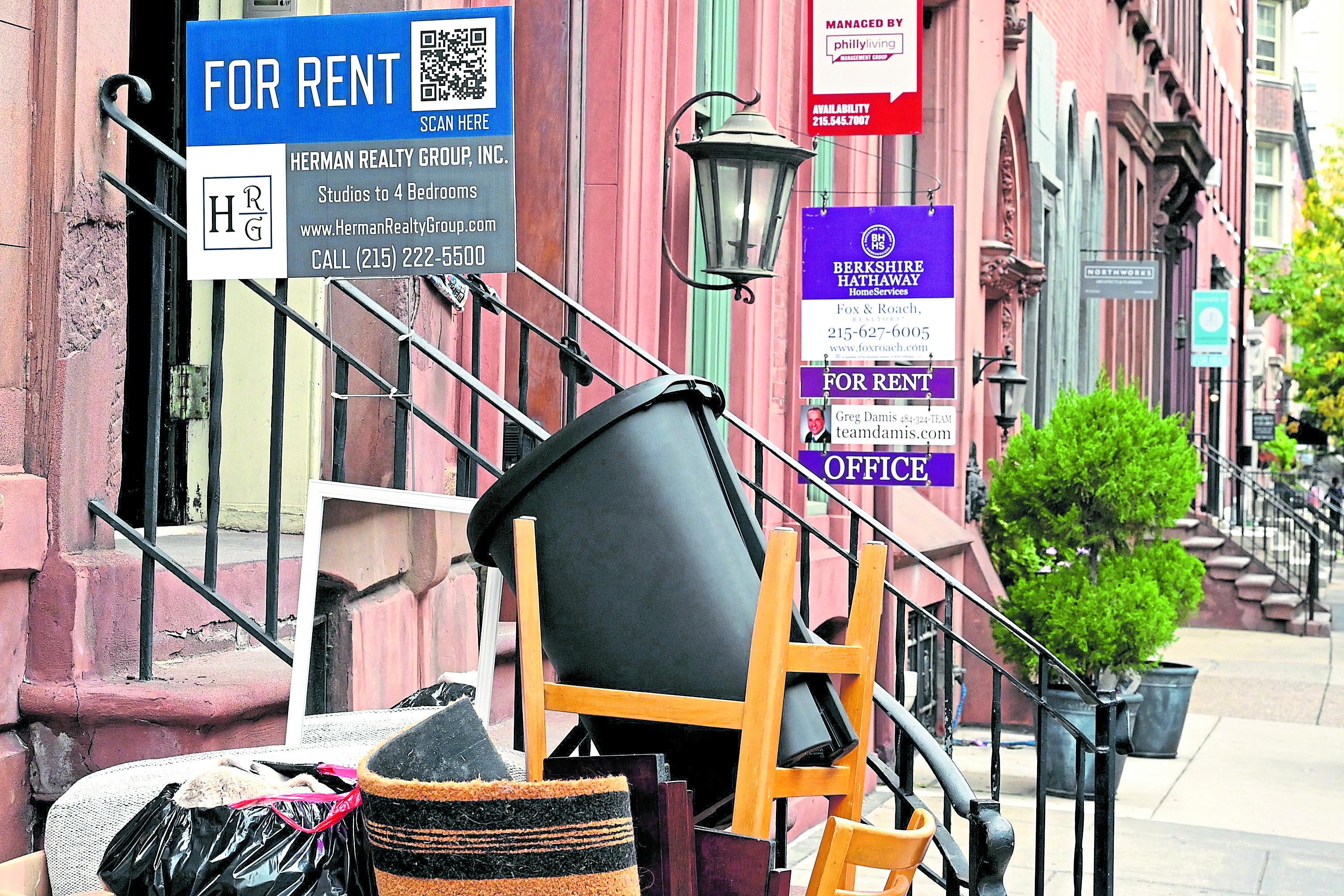 Discarded furniture and rental signs are seen along a street in Center City. A report released this month, based on a survey of more than 6,000 renters, details trends in Philadelphia's rental market. It's one of the largest surveys of city tenants. TOM GRALISH / File Photograph
PREVIOUS IMAGE

It's a rough time for renters.

Fewer rentals are available this year than last year, when rental vacancy rates also were low. Rents continue to increase. Some home seekers are being asked to bid on rentals.

Many current tenants are behind on rent, facing the consequences of past evictions, and worrying about the quality of their homes, according to the experiences of more than 6,000 people collected by the legal aid nonprofit Community Legal Services of Philadelphia and the Housing Initiative at Penn. It's one of the largest surveys of Philadelphia renters.

The report, released this month, "starts to document in a quantitative way these rental dynamics in the city," said Cypress Marrs, a housing research analyst with the University of Pennsylvania's initiative for more equitable and effective housing policy.

"As the federal government moves on from the emergency resources it provided to households during the pandemic, we must remember that the housing crisis is far from over," the report's authors wrote. "Circumstances have only become more difficult for many households who have built up significant debt."

The people who responded to the survey mostly lived in West and North Philadelphia, places where most renters - especially those with lower incomes - live. The sample of renters is representative of the city's low-income renter population at large, according to the report's authors. Renters answered survey questions either as part of the city's rental assistance program or through a form promoted by community organizations.

Community Legal Services and the Housing Initiative at Penn are convening researchers and housing advocates to discuss findings at a virtual event Thursday evening. Below are some takeaways from the report.

Many tenants are behind on rent

The height of the COVID-19 pandemic is in the past and so is the peak of the federal rental assistance meant to help tenants and landlords. Philadelphia's rent relief program, which distributed more than $261 million to renters over four phases, is out of money. City Council will vote on a budget Thursday that includes an additional $15 million in rental assistance.

Almost 60% of surveyed renters said they were behind on rent. They owed an average of about $2,700. Of those who owed back rent, almost 60% were Black and 20% were white.

To pay rent, they borrowed an average of $1,562, mostly from family and friends.

Their median rent was $986 and their monthly utility payments totaled a median of $168.

Almost two-thirds of tenants hadn't had a rent increase in the year before answering the survey. Rent increased for the rest by an average of $162, or 16%. Such an increase is enough for rent to take up more than half of income for roughly 32,000 more renting households in Philadelphia, according to researchers.

Of the roughly 2,000 renters who answered survey questions outside of the rental assistance program, about 14% said they had been evicted through the court process in the past. More than half were women and almost half had a disability.

Four out of five of the renters who reported evictions said they later had rental applications denied because of those evictions. Evictions lead to higher chances of housing instability, homelessness, and physical and mental harm.

Asian and Indigenous households were the groups most likely to say they had been evicted through the courts, according to the report, "a particularly important finding given that many existing surveys often under sample these two groups."

Black households are more likely to experience more than one eviction.

Researchers found that in the year before the pandemic, illegal or informal evictions - those that did not happen through court processes - were about on par with the number of court-based evictions. That suggests that almost 20,000 renters in Philadelphia may face illegal eviction in a given year, according to the report.

Marrs, who isn't one of the report's authors, said researchers were happy for documentation of the prevalence of illegal and informal evictions, which by their nature are difficult to track. The report found that informal evictions, including landlords changing locks or shutting off utilities, increased during the pandemic after evictions in court temporarily stopped.

Renters worry about the quality of their homes

More than a third of survey respondents who had been evicted for nonpayment of rent said they stopped paying because their rental property owner wouldn't make repairs or had threatened or harassed them. The share of renters withholding rent because of concerns about habitability - about 20% - was a striking finding, Marrs said. It was the same share as those who didn't pay rent because of a change in their finances.

The quality of rental housing has deteriorated during the pandemic as small landlords in particular struggled while not receiving rent. More rental property owners deferred maintenance, according to the results of a survey by Penn and Harvard researchers released last year.

More than four in five renters surveyed said they are worried about pests, mold, peeling paint, unaddressed repairs, and other issues of housing quality. Black and Asian households were more likely to face concerns with housing conditions.

Renters with past evictions are more likely to have trouble getting landlords to make repairs and address housing quality concerns, Marrs said. This suggests a lower quality of housing that households with prior evictions are able to get.

"Thinking about housing as a health need is really important," Marrs said.