Due for Repair
Arch Street United Methodist Church seeks to restore its spire and fund other updates. 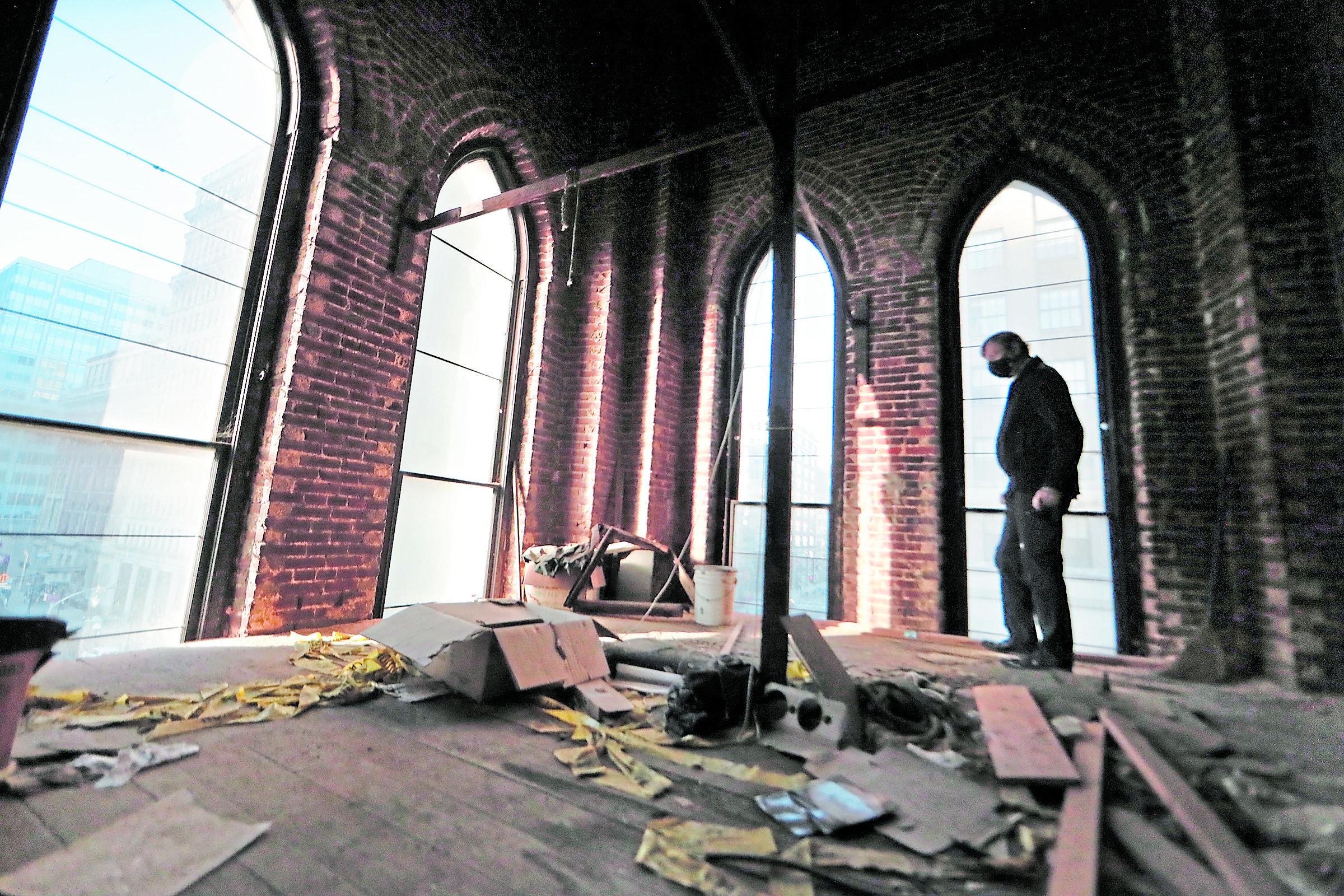 The pastor surveys the interior of the church's spire, which was declared by the city to be "unsafe" and in need of immediate attention. 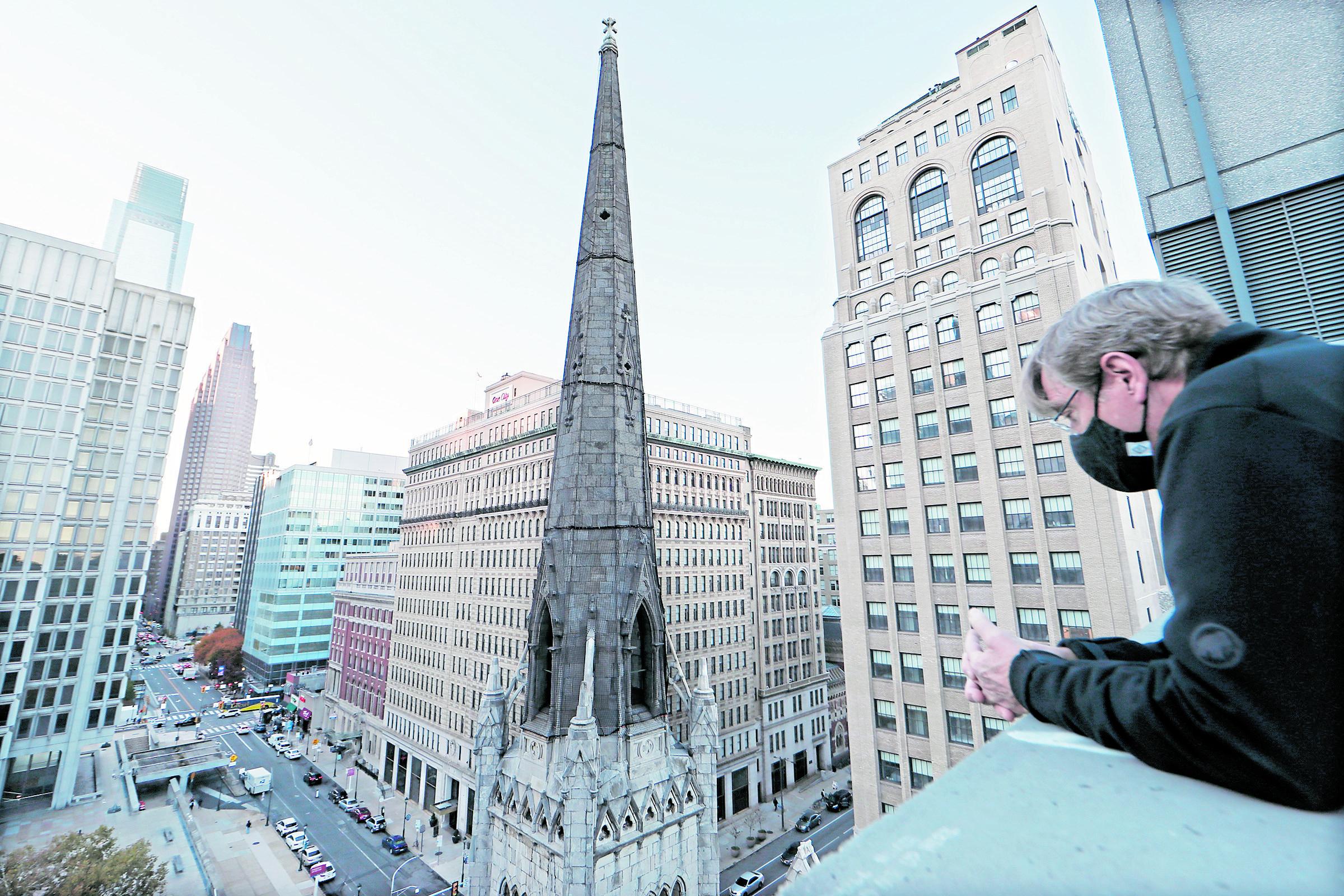 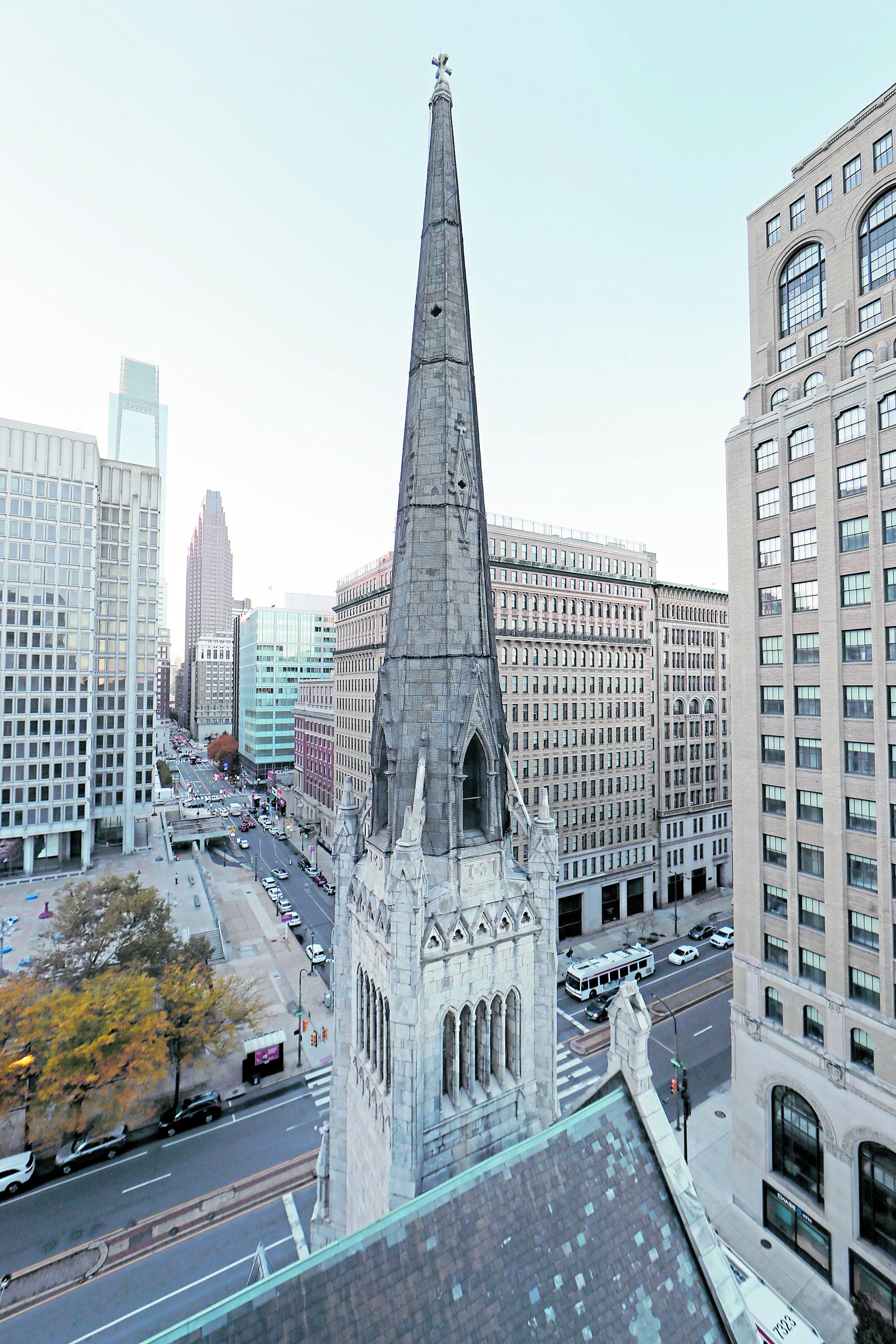 Pastor Robin Hynicka, above, carefully climbs down a level inside the spire at Arch Street United Methodist Church on Broad Street. At left, is a view of the church and the protective netting covering its spire. The church installed netting and street scaffolding to protect pedestrians after the city concluded that the spire was "unsafe" and needed immediate attention. ELIZABETH ROBERTSON / Staff Photographer 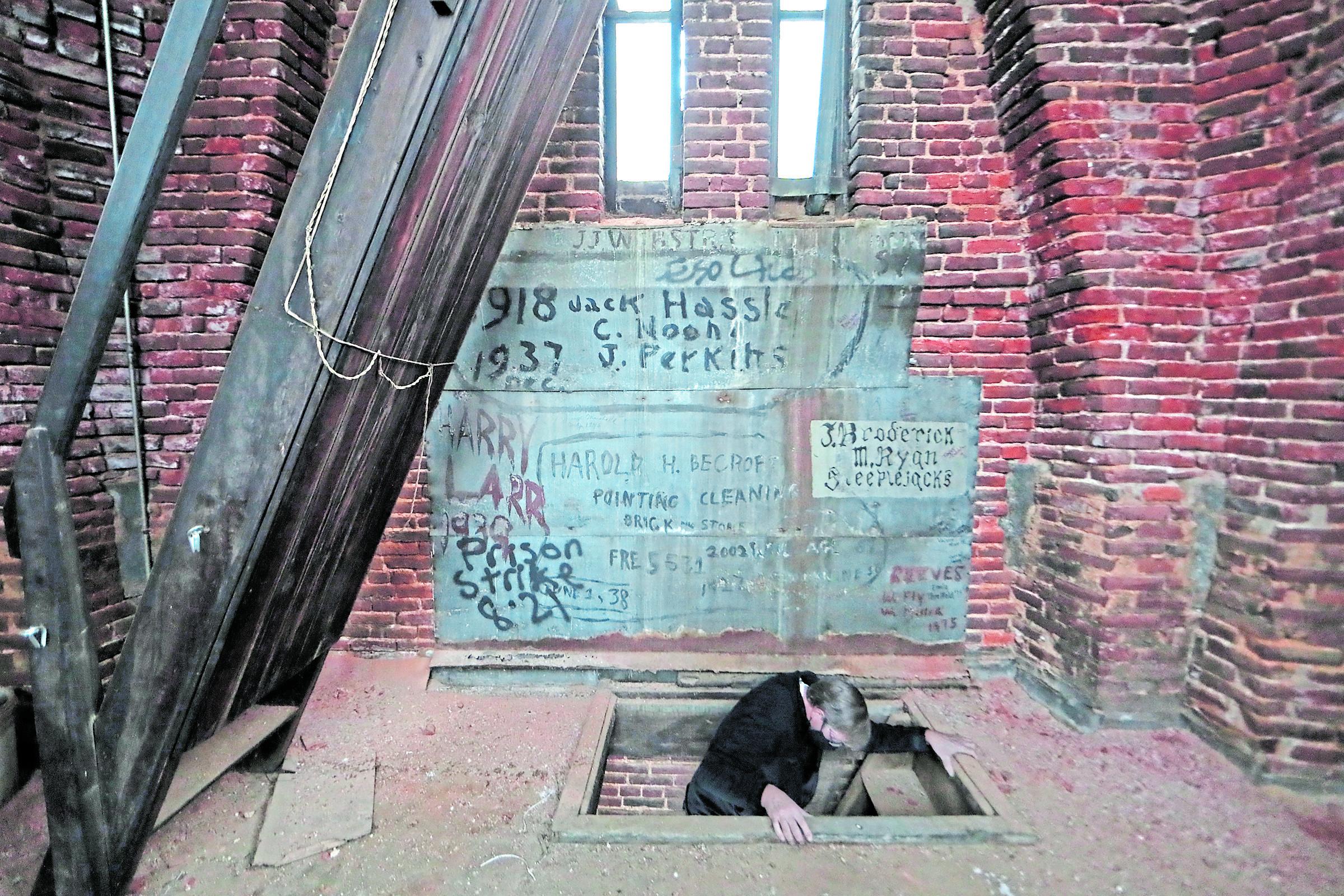 
At the end of January, during 2021's most truculent period of sleet and snow, Tim Barry, an operations manager with CAN USA in northern New Jersey, took his crew of half a dozen up more than 200 feet over Broad Street and dropped a massive net over the graceful but ailing spire of Arch Street United Methodist Church.

No big deal, Barry said Monday - just another day at the office high in the bitter cold, snow swirling everywhere, wind whipping every which way, masonry and stones threatening to plummet to the sidewalk below.

"Basically it was what was expected," Barry said with a kind of verbal shrug.

But for Robin Hynicka, Arch Street United's pastor, it was a little more consequential.

"They performed that work in the middle of that snowstorm," Hynicka recalled. "Remember that big snowstorm we had at the end of January, beginning of February? They were on the spire, actually, with rappelling ropes, putting this net around with a big crane."

It was dramatic. And it was expensive. About $150,000 for the netting. But the city had concluded that the steeple was "unsafe" and in need of immediate attention. Up went the netting and a considerable amount of street scaffolding to shield pedestrians.

Now Hynicka and other leaders at Arch Street United, a church known primarily for its robust social services, particularly for poorer and unsheltered city residents, are launching a larger effort designed to restore the spire and perhaps much more of the church structure.

On Wednesday at 11 a.m., Hynicka and city and state leaders will gather on Broad Street in front of the church, just south of Arch Street, to draw attention to a major grant that Arch Street United has just been awarded by the National Fund for Sacred Places - a two-to-one $125,000 matching grant.

"They are in a pivotal location because they're right there by City Hall," said Robert Jaeger, president of the nonprofit Partners for Sacred Places, which administers the fund. This year, Arch Street United and Calvary United Methodist Church in West Philadelphia, have been awarded substantial matching grants.

Why? Arch Street United, said Jaeger, is located "right there where the homeless population is considerable and they're very visible and I think by acting in a creative, caring way, they can provide help to Philadelphia."

"You might say, 'Well, do they really need a tower?' " Jaeger continued. "They're also a part of our streetscape, our cultural history. It's one of those grand buildings around City Hall. That complex of Arch Street Methodist, the Masonic Temple, City Hall, and, you know, the office buildings all around it is just one of the greatest urban streetscapes in America."

The church has now taken the opportunity to look beyond the spire and its woes to the entire building.

"We've assembled a number of projects that kind of link to this," Hynicka said. "The spire itself could be anywhere between $2 1/2 to $4 million, depending on what gets done. The roof is part of the project, which could be about a million dollars, and then we have HVAC issues. We've already raised money and have support to do a exterior handicapped-accessible ramp which we've been wanting to do for years, which we will accomplish in the next year before the end of before the summer of 2022."

A fund-raising campaign seeking $5 million is on the table.

Church spires are among the most prominent features on the urban streetscape, of course, but they are also among the most threatened structurally. Even Christ Church, a national historic landmark, has faced serious steeple problems. It had to raise millions in recent years to stabilize its famous spire, which was listing 22 inches "toward Trenton," in the words of the Christ Church pastor.

Arch Street United, designed by Addison Hutton and completed in 1870, is a certified Philadelphia historic landmark, but it does not have the national visibility of its 18th-century Georgian cousin. Nor is the spire listing or in danger of collapse, according to church leaders.

But clearly such structures suffer from simple existence. If you're a church spire, being is perilous.

"I think it's the impact of time and weather and gravity that these thin masonry structures that soar over our heads are just subject to all of the slings and arrows that cause anything and everything to deteriorate," said Paul Steinke, executive director of the Preservation Alliance for Greater Philadelphia. "So this one has been standing there for 150 plus years. Through hurricanes and nor'easters and blizzards and searing sunshine and high winds and just getting to the point where the mortar is washing away and the structure is beginning to show signs of decay, and like any other structure, it needs maintenance in order to remain."

And maintenance means money, which is in short supply for churches with diminishing congregations and missions focused on human services, not building repair.

Given such realities, Hynicka was not surprised when a 2019 engineering inspection, performed at the behest of city regulations, revealed some serious problems with the spire. Engineers from CVM, hired by the church, flew a drone up inside the interior of the spire and discovered deterioration of the mortar. They created a laser model of the spire and performed a visual inspection and determined there were loose tiles and potential issues with exterior parts of the spire, which conceivably could deteriorate and fall to the ground.

"We're not being told that this steeple is going to topple over, or anything like that," said Hynicka on recent climb up through the steeple interior, a dusty excursion up a series of increasingly steep staircases.

"There is what they call 'spalling.' That's where pieces of the marble chip away."

Hynicka said that, so far, spalling seems to be only something that might occur; there's no evidence that it has. That said, he said that "the potential for pieces breaking off is something that concerns the engineers and that made them report to the city that this is an unsafe condition."

The church is completely committed to the project and the $5 million fund-raising effort. Leaders see it as integral to the church's human mission.

"We're committed to continuing the ministry and we have this gift of a building," said Russ Alexander, head of the church trustees. "So we feel it's a commitment to the community to continue the ministry at that location. And in order to continue, we've got to have a building that protects the public and that's safe for everybody to use, both the people inside and the people outside. So, yeah, we're mounting this effort in the hopes that everybody agrees with us and that we can get the resources to fix it. That's the essence of the message."