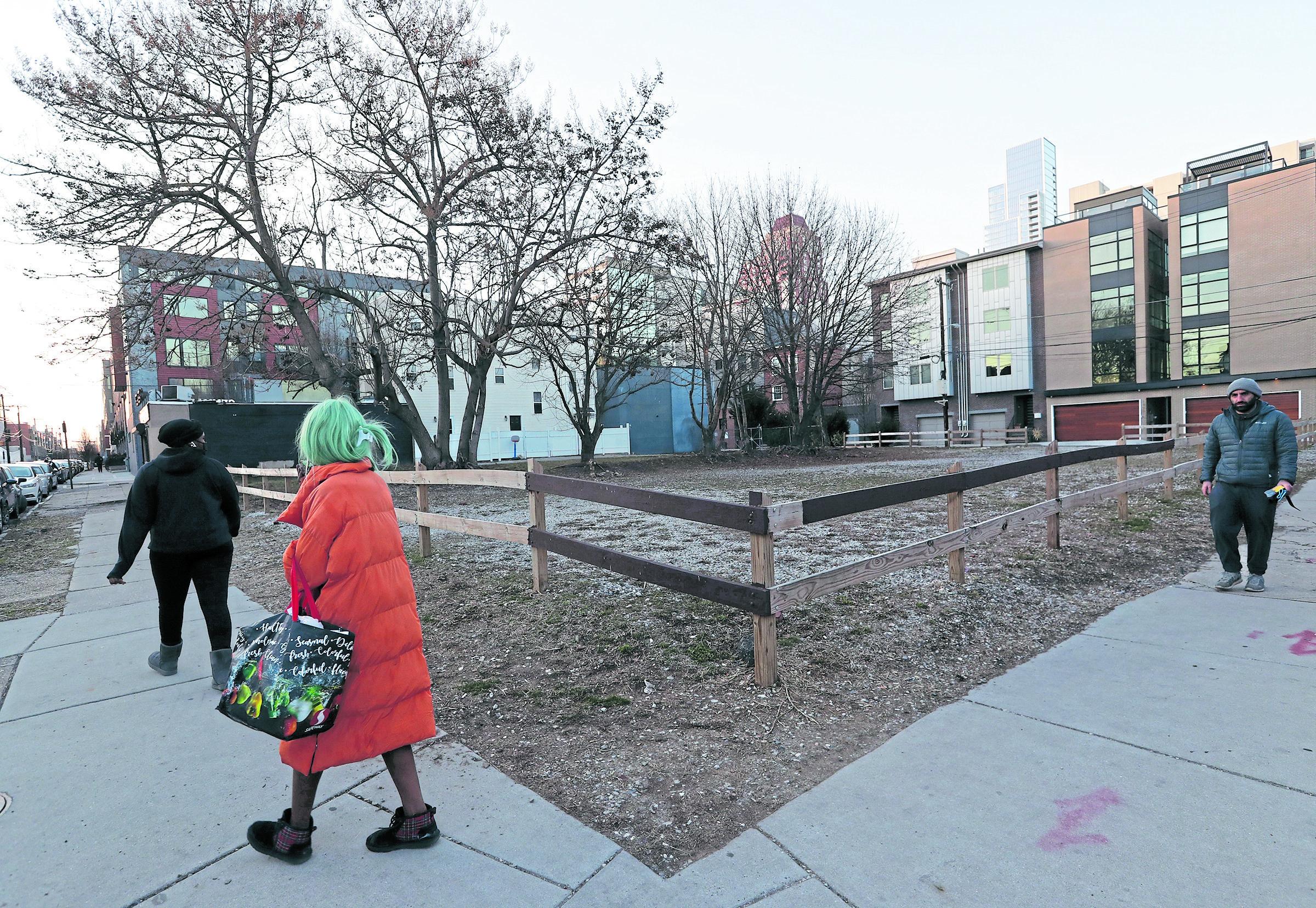 Pedestrians walk near the city-owned vacant lot at the northwest corner of 13th and Bainbridge Streets which is being considered as a "land trust" site. YONG KIM / Staff Photographer
PREVIOUS IMAGE

A pilot program aiming to increase affordable housing in Philadelphia has hit some snags, with the developer reducing the proposed number of affordable units and neighbors expressing skepticism about the project.

The project, on a city-owned lot in the Hawthorne neighborhood, would be a new experiment with what is known as a "land trust," an arrangement in which the city leases the land to a redeveloper long-term instead of selling it outright, in order to ensure affordability requirements are honored.

The site, at 13th and Bainbridge Streets, has sat empty for decades. Last year the Philadelphia Redevelopment Authority began talks with Benchmark Construction Group to build a 45-unit apartment complex called "The Parker" that would reserve a portion of its units for tenants earning 60% of the area median income or less.

But plans for the mixed-income development have already changed. To make financing work, Benchmark bumped plans to keep 35% of units affordable down to 30%, which still satisfies city demands. And now the project remains on hold as the redeveloper considers adding parking to the project amid residents' concerns. Experts say the saga showcases how stymied any development can be, especially a proposal that includes affordable housing and requires some creativity to finance.

"Everything about it is hard," said David La Fontaine, executive director of nonprofit developer Community Ventures. "It's hard to reach agreement with neighbors who don't speak with one voice . . . and it's really expensive. You gotta get a whole bunch of money together."

South of Center City, the Hawthorne neighborhood has had a steady flow of redevelopment in the past 30 years coupled with rising housing prices. In 1999, the city razed Martin Luther King Jr. Plaza, a public housing complex in the neighborhood, and the city condemned and acquired more than 100 surrounding properties through eminent domain.

Condemned by the city in 2000, the 13,000-square-foot lot on 13th and Bainbridge remained vacant even as the rest of Hawthorne transformed. The South Philly nonprofit Universal Companies and affordable housing developer Pennrose bought the land in a $3 package deal in 2005, promising the city it would redevelop it within 18 months.

The empty lot became a magnet for trash and illegal dumping. The city finally took the property back in 2019, after City Councilmember Kenyatta Johnson was indicted for allegedly using his office to keep the land in Universal's hands in exchange for a bribe.

Last year, city officials used the property as an opportunity to experiment. They proposed a land trust model as an alternative to the longtime system of auctioning off the thousands of parcels of land that have fallen into city ownership over the decades.

If successful, the pilot could complement other city efforts to create and preserve affordable housing, such as the rental improvement fund and the shallow rent program.

In the case of the Bainbridge site, the city is offering to lease the property for 99 years to Benchmark for a nominal sum - a total $20,000 for the first year. In exchange for the low rental fee, developers agree to build a set number of affordable units earmarked for residents earning 60% of the area median income.

While 14 units may not be transformational, experts such as Benjamin Keys, who teaches real estate and finance at the University of Pennsylvania's Wharton School, see the pilot as a way to keep units affordable.

"I think of it as one more financing tool in the tool kit, and one that should absolutely be explored and tested," he said.

Philadelphia Housing Development Corp. spokesperson Jamila Davis said this arrangement would guarantee the development's 14 units stayed affordable for decades longer than other programs using traditional tax credits, which would allow units to rent at market value after 30 or 40 years.

What's more, the city remains the title owner of the properties, so if developers don't follow the terms of the lease agreement - as has happened in the past - the city could evict them, according to Davis, which would be easier than getting the title back.

But since then, the project has been in a holding pattern.

A vote to select Benchmark as the developer has been repeatedly tabled. In December, concerns about affordability led the board to delay its vote. The PRA board asked Benchmark to make adjustments to ensure rents for affordable units don't exceed Pennsylvania Housing Finance Agency guidelines.

"The developer is revising their budget and plans to address the issues raised by the PRA Board; first and foremost was the affordability of the units proposed," said Davis.

To make the financing work for Benchmark, which doesn't plan on using any other subsidies for the development, only 30% of units will be marked affordable.

Some residents are worried the pilot is a Trojan horse that will bring few working-class families and accelerate gentrification.

"We're concerned that the people who have done all this hard work and really struggled through now who've made the neighborhood a desirable one are being pushed out by these developments," said Lance Haver, 66, who sits on the board of the Hawthorne Empowerment Coalition.

The redevelopment authority received a flood of complaints in December from residents concerned about parking availability, higher property taxes, and loss of open space.

"If we've learned from the pandemic it's that natural spaces and getting outside is not only great for humans to enjoy that kind of fresh air, but it's really good for the land with climate change and everything going on," said Johnny Buckley, 44, who teaches in the neighborhood and has been bringing young students to the open space.

Michelle Perry grew up in MLK Plaza, lives in the neighborhood, and would like working families to reap the benefits of revitalization.

"As a longtime resident, I cannot sit back and watch another piece of land taken and swallowed up by everybody else other than the people who built this community, people of color who worked hard to make it as beautiful as it is," wrote Perry in a letter to the Philadelphia Redevelopment Authority's board.

Benchmark president Kenneth Penn said the company is determining the feasibility of added parking while keeping plans to build 45 total units. Despite the delays, Penn said he remains optimistic about the pilot and Benchmark's ability to inspire other developers to finance affordable units.

"Hopefully, the city will look at doing more of these," he said. "It's not finalized, but we're working to meet [the community's] needs. It's the only thing we can do."