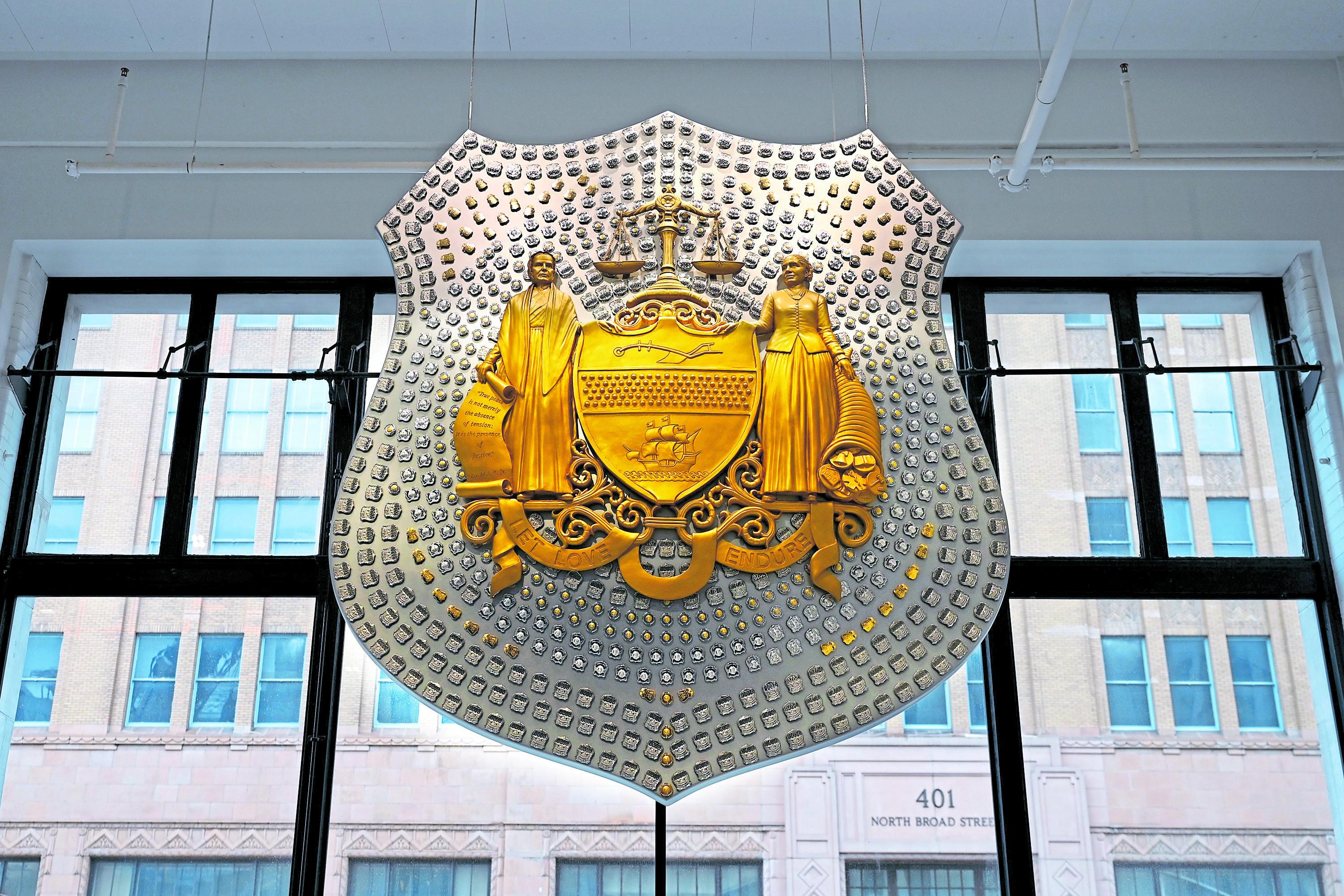 A detail of the new public art installation by Donald Lipski - a large replica of a police shield studded with 1,400 officer badges - in the public lobby at 400 N. Broad St., now the new headquarters of the Philadelphia Police Department. 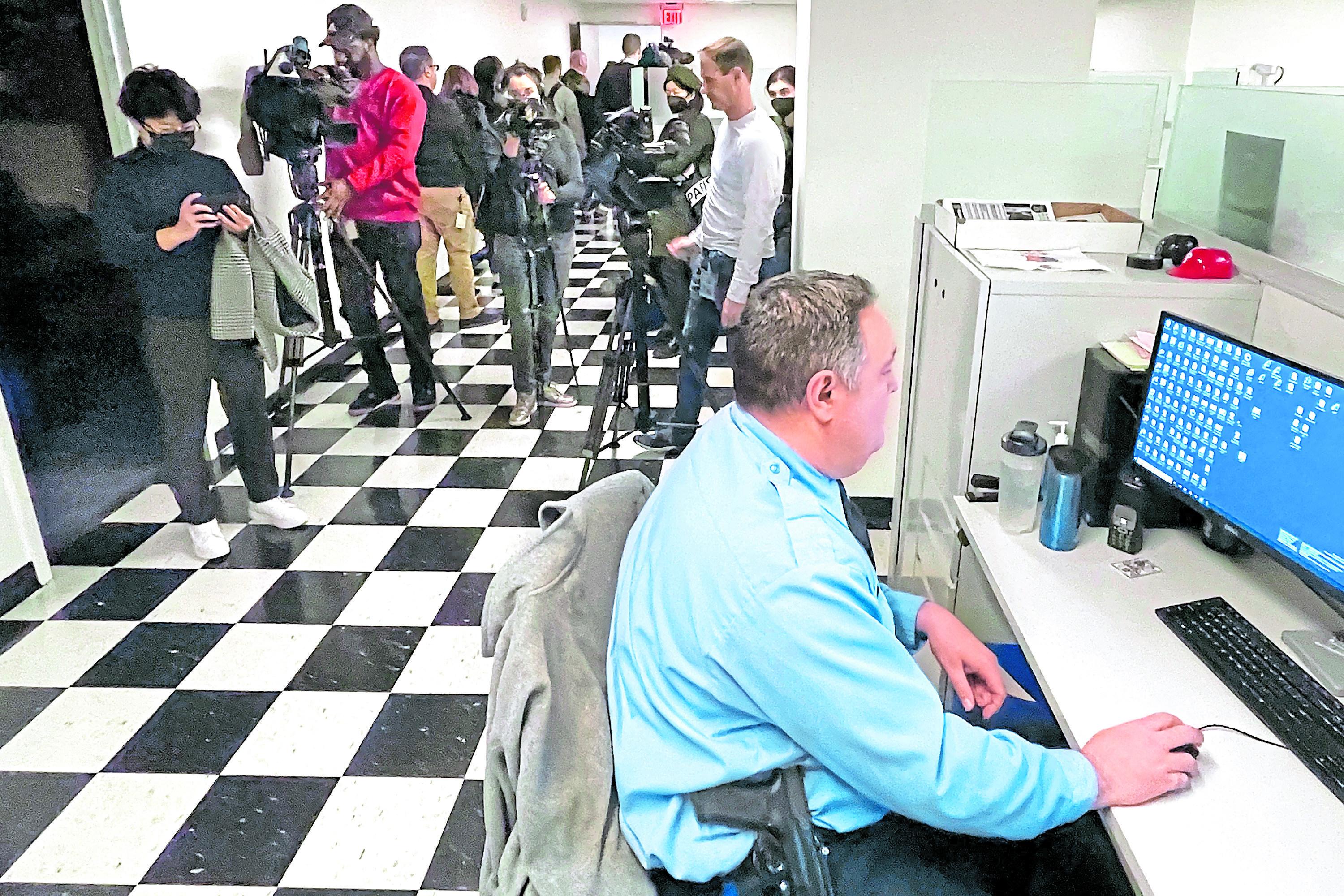 Steve Kiefer, a crime analysis officer, works at his desk as a group touring the new Philadelphia Public Services Building passes. Architecture critic Inga Saffron writes, "The floors in the hallways are finished in a checkerboard of black-and-white vinyl tiles, which resemble something you would see in a school cafeteria." TOM GRALISH / Staff Photographer 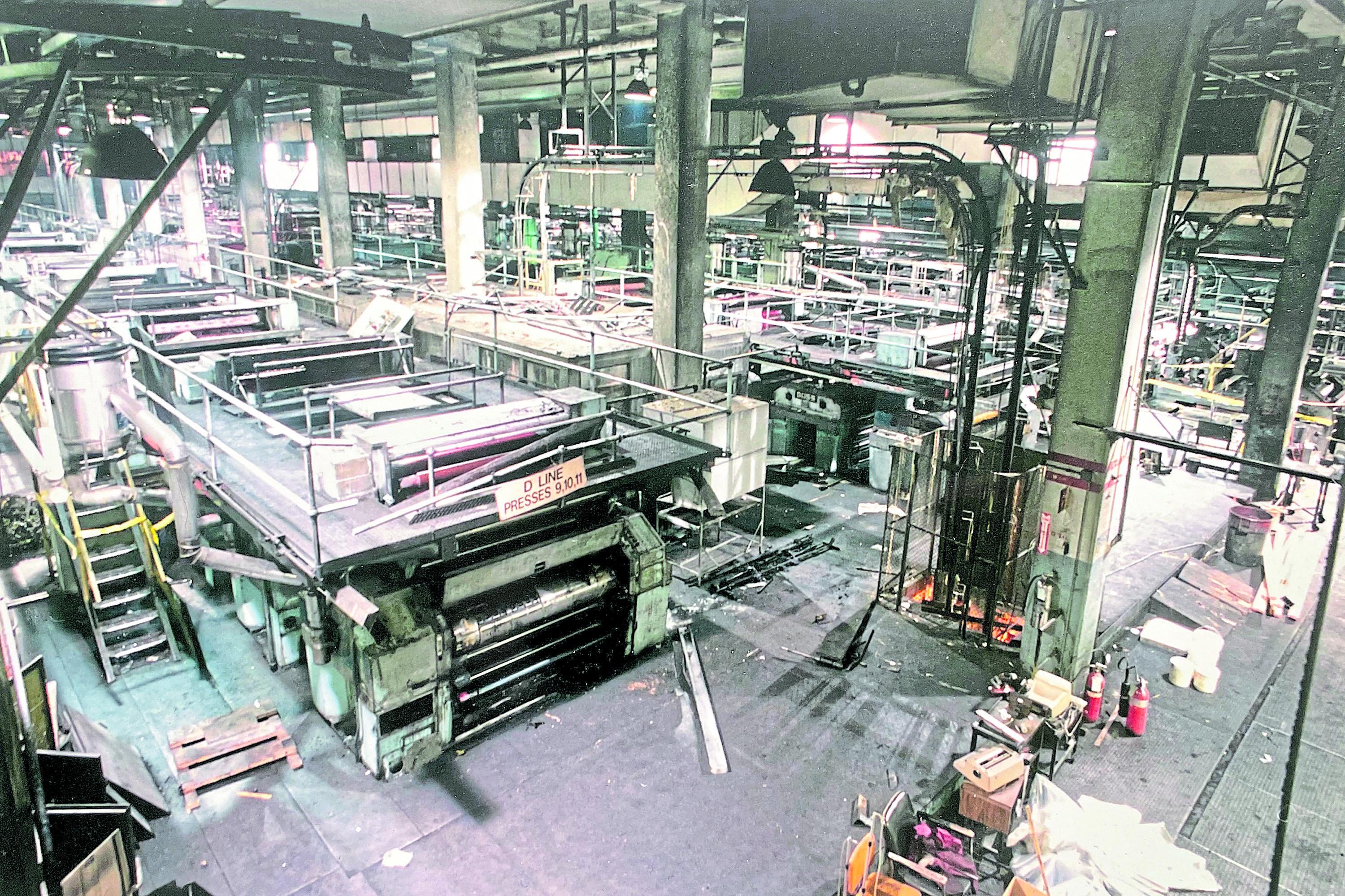 The old Inquirer and Daily News printing press area in 1995, before it was renovated and became The Inquirer's newsroom. TOM GRALISH / File Photograph 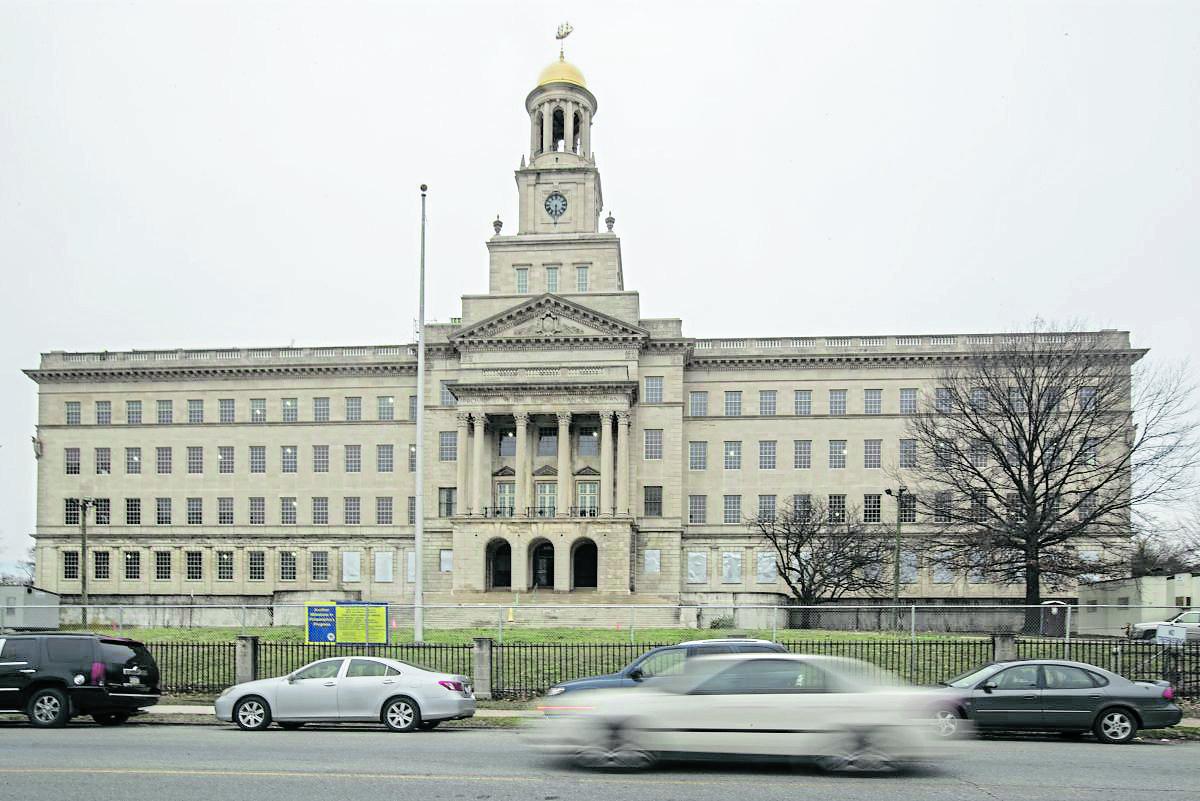 The Provident Mutual Life Insurance Building at 46th and Market was originally intended to be the new headquarters, but Mayor Jim Kenney reversed the decision in 2017. File Photo 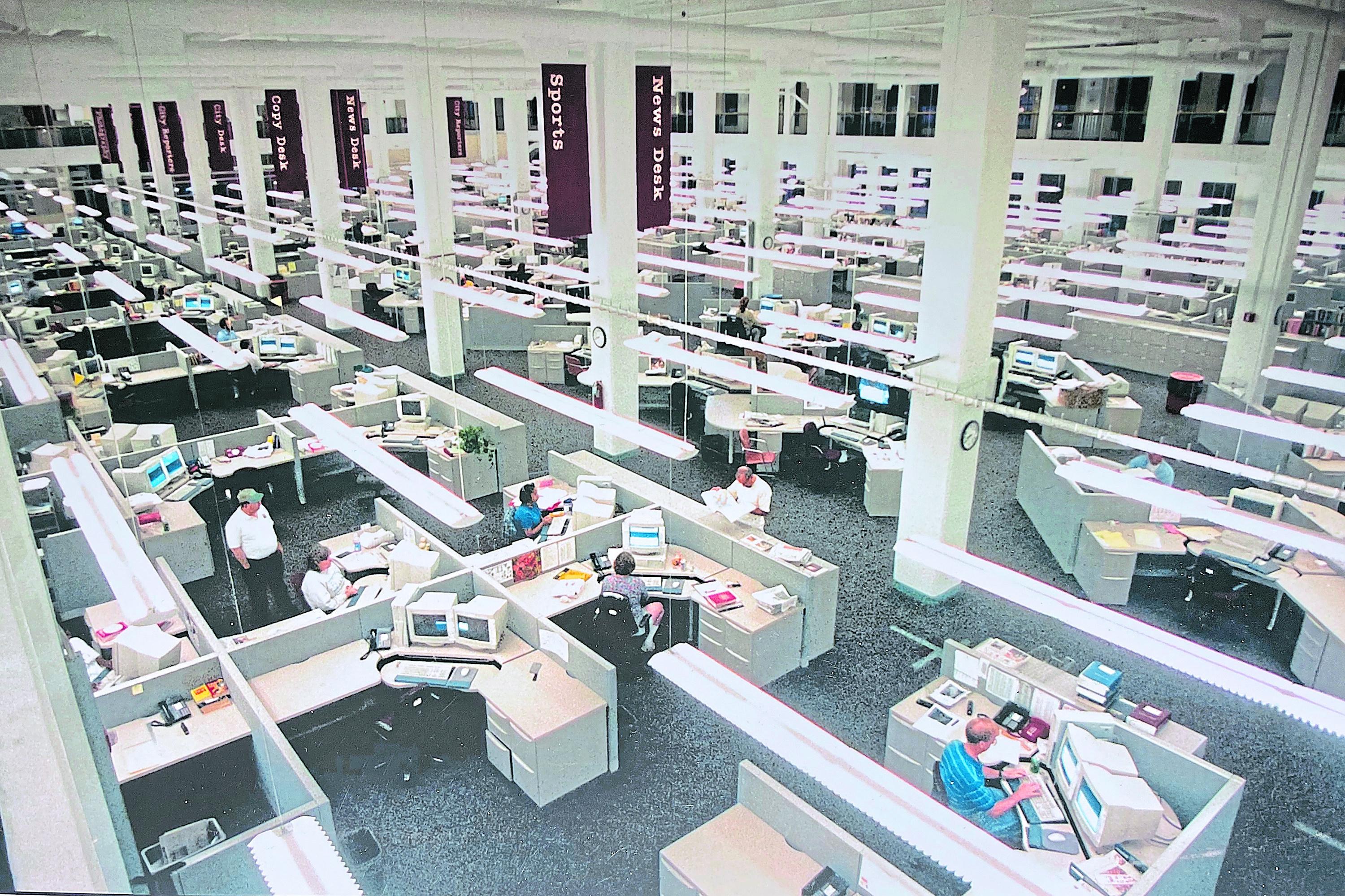 The Inquirer newsroom in 1997. The space had housed printing presses that were removed after the newspaper's Schuylkill Printing Plant opened in Conshohocken. TOM GRALISH / File Photograph 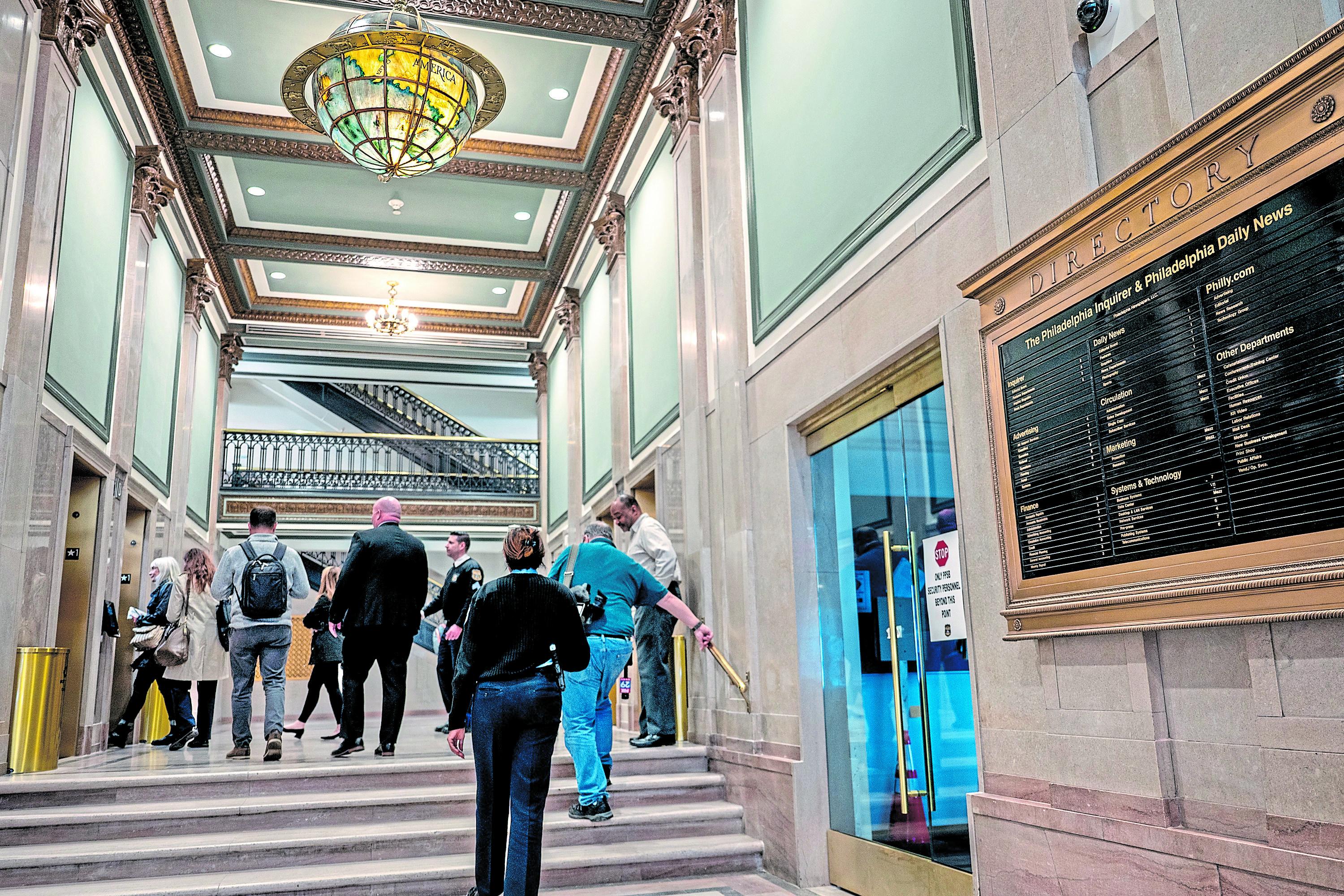 The unique globe chandelier and an old Inquirer and Daily News directory remain in the lobby of the renovated building. The globe that lights the space was restored as part of the conversion project. Saffron characterizes the lobby and exterior as "stunning." 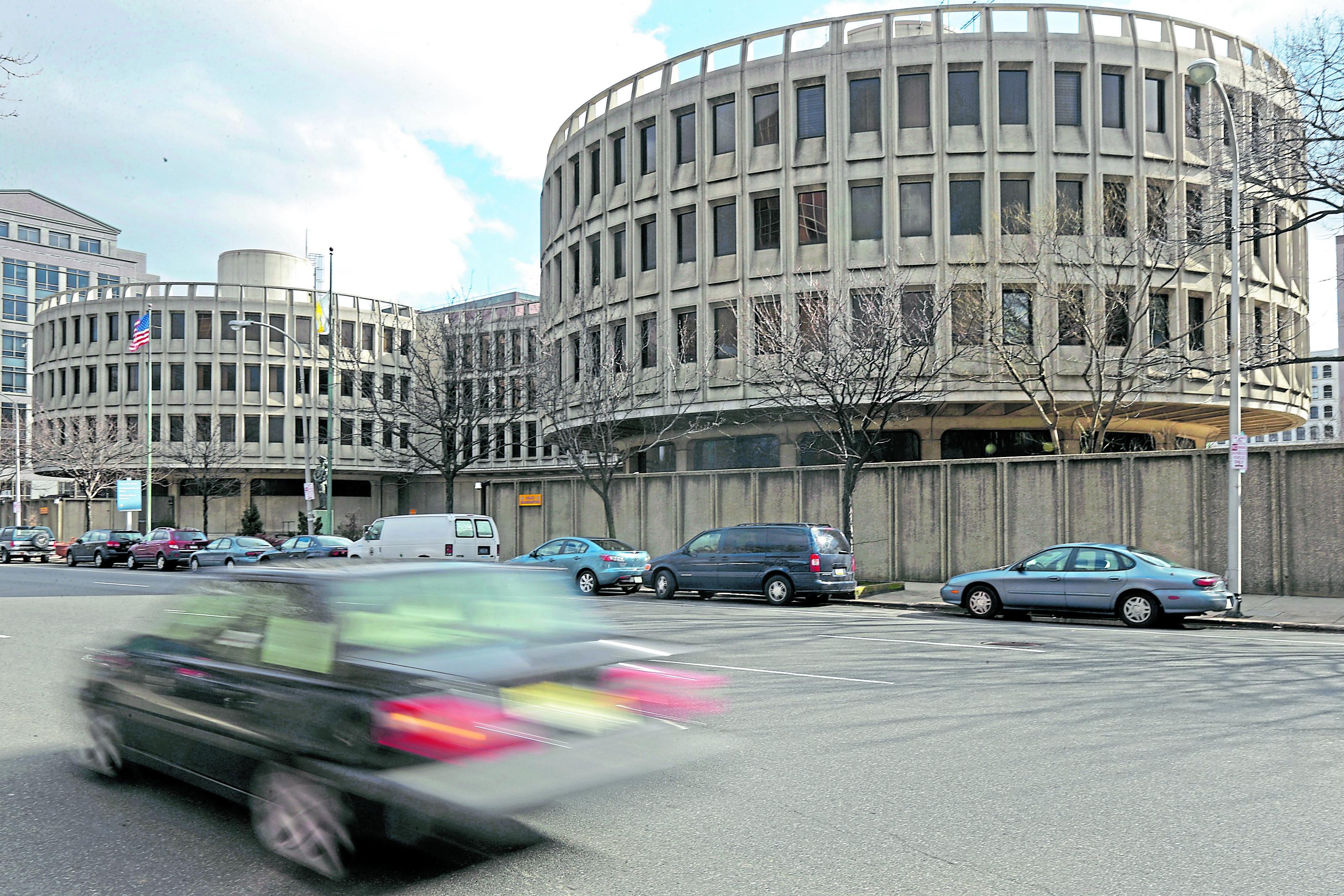 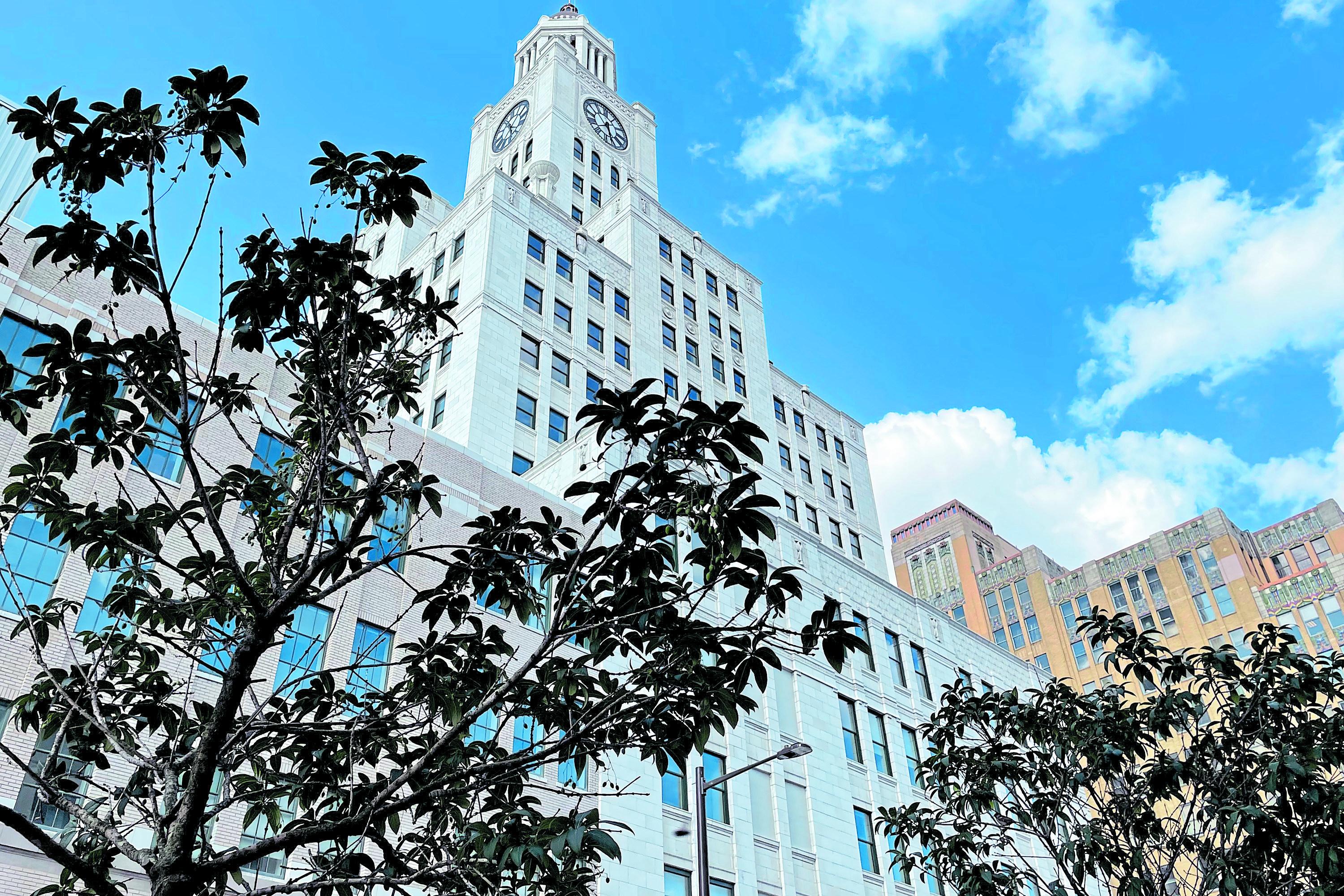 The former Inquirer and Daily News building at 400 N. Broad St. is the new headquarters of the Police Department. The renovation of the outside is a shining success. The inside is a whole other story. TOM GRALISH / File Photograph
PREVIOUS IMAGE

It's been a full decade since The Philadelphia Inquirer and Daily News sold their soaring white tower on North Broad Street and moved into the ladies' garments section of the long-defunct Strawbridge & Clothier department store. Now the Philadelphia Police Department is giving up the Roundhouse, a product of the city's heralded, '50s reform era, and installing itself in the lower floors of The Inquirer's classic newspaper building.

Such is the cycle of life in the modern city: Institutions evolve. Space requirements change. Survival beats sentimentality. As The Inquirer struggled to reinvent itself for the digital age in 2012, its new quarters allowed the media company to shed the baggage of its print history. Given the reckoning that American police departments have faced since the murder of George Floyd, leaving the cramped Roundhouse on Race Street - with its tainted history of abuse and lingering ghost of Frank Rizzo - could similarly give the embattled Philadelphia force a chance to forge a new approach to policing.

But from what I saw during a 90-minute tour of The Inquirer's old home (once my work home, too), it's hard to imagine that the renovated building will provide a conducive environment for the much-needed changes. The $280 million construction project, which was managed by the Kenney administration and executed by developer Bart Blatstein's Tower Investments, has produced a dismal municipal bunker, walled off from the surrounding city and the people the police are meant to protect.

While the historic Inquirer tower, designed in 1925 by Rankin, Kellogg & Crane, rises 18 stories, the Police Department will occupy only the lower seven. The upper floors will be mothballed and most of the building's 1,200 occupants will be housed in the five-story horizontal podium along Callowhill Street, a cavernous space originally built to contain The Inquirer's mighty presses. After the print operation moved to the suburbs in the early '90s, that area was converted to one of the most inspiring newsrooms in America, a bi-level cathedral of light with 40-foot ceilings. Yet, somehow, the city and its design consultant, USA Architects, have managed to turn the sun-drenched interior into a warren of windowless, low-ceilinged offices.

As the city's media tour made its way along the long dreary corridors, there were so few views of the outside world that journalists began to lose track of their location. Were they on the Broad, Callowhill, or 15th Street side of the building, several wanted to know. The floors in the hallways are finished in a checkerboard of black-and-white vinyl tiles, which resemble something you would see in a school cafeteria back in the '60s. The busy pattern further compounds the disorientation. The walls are painted a cerulean blue, as if to suggest a sky that no one will see.

Once we reached the homicide division, the claustrophobia only intensified. The 100-person unit, which is battling to reduce Philadelphia's deadly gun violence, has been shoehorned into a single room. While detectives no longer have to share desks, as they did in the Roundhouse, their new office does not have a single window. Several electric typewriters were lined up on a row of filing cabinets. They were brought over from Race Street, despite being labeled "broken." Their presence gives the place an aura of built-in decrepitude.

Things aren't much better in the medical examiner's office and morgue. The city did manage to provide a shower stall, so pathologists can wash off dangerous bacteria after conducting an autopsy. But the design is closer to something you'd see in a prison. Meanwhile, the video conferencing room has been given the best seat in the house, with a wall of windows overlooking Broad Street. The problem is, the ample natural light requires the shades to be pulled tight during calls.

Yes, the restoration of the building's exterior and historic lobby is stunning. At some point in the past, the Inquirer building was given a coat of snow white paint, which ended up obscuring the rich texture of its terra-cotta and brick facade. Now that the paint has been removed, we can see that the tower is more of a rich ivory and the building base, once industrial gray, is a warm buff tone.

Every keystone, shield, medallion, and urn stands out in sharp relief. The Westminster chimes in the bell tower, which was designed to echo the early American versions atop Independence Hall and the Merchants Exchange, once again toll on the hour.

Such a pristine restoration is the least that the public deserves, given that Blatstein received $40 million in historic tax credits from the federal government to subsidize the work.

How, then, did USA Architects make such a mess of the interior? The firm is the same one that designed the forbidding, black-and-white striped tower on the Camden waterfront for South Jersey political boss and insurance executive George Norcross. But I suspect that even the best architects probably would have struggled to carve up the lower floors into pleasant offices. That long horizontal podium, nearly 400,000 square feet, is extremely deep, and most of the windows are on the Callowhill and Broad Street sides. Once private offices were constructed along window walls, the rest of the interior was left in the dark. Because journalists were not allowed to see the space designated for the 911 call center, it is impossible to evaluate what working conditions will be like there.

These days, most modern office buildings are designed to bring in as much natural light as possible. Managers have come to understand that employees do much better when they can glance outside as they work. The upper floors of The Inquirer's slim tower would have provided offices with plenty of windows. But the city chose to concentrate the police functions in the lower, more horizontal, portion of the building.

Although the Police Department had been looking for a new home for more than a decade, moving to the Inquirer building was a last-minute decision. In 2016, after extensive consultations with former Police Commissioner Charles H. Ramsey, Mayor Michael Nutter selected a vacant office building at 46th and Market for the new police headquarters. It was a huge property, with plenty of room for parking and easy access to the Market-Frankford El. But shortly after coming into office, Mayor Jim Kenney canceled that plan and signed a lease with Blatstein for the Inquirer building.

The explanation for the change was that it made more sense for the police to be in Center City, close to the courthouses and government offices. But I have come to think of the abrupt switch as "Rizzo's Revenge." The Inquirer and Daily News have a long history of investigating police misconduct and regularly tangled with Rizzo when he was police commissioner. After construction workers blockaded the building in 1976, to protest a satirical column about their union activities, The Inquirer claimed that Rizzo turned a blind eye to the situation. No police came to The Inquirer's aid. Instead, the paper was forced to ask federal marshals to clear a path so employees could return to work in the building.

Having now seen the conditions inside the Inquirer building, it seems that revenge isn't so sweet. The police would have been much better off at 46th and Market, in the former Provident Mutual Life Insurance Building.

So would Philadelphia taxpayers.

The Nutter administration borrowed $52 million to renovate the Provident, and the exterior work was virtually complete when Kenney reversed course. While he promised the city would recover its costs by selling the Provident to a developer, the city was able to get only $10 million for the building. According to Councilmember Allan Domb, an expert in real estate finance, that folly alone will ultimately cost taxpayers $90 million, since the city must still pay off the remainder of the loan, plus interest.

The price of moving to The Inquirer will also add up, Domb argues. Over the next nine years, the city will pay $140 million in rent to Blatstein. After that, the contract calls for the city to purchase the building. Domb estimates that the purchase price could be close to $400 million. When you total those numbers, the complete cost for the new Philadelphia Public Services Building could be as much as $630 million, far more than the city has ever spent on a building project. Of course, by the time the bill comes due, another mayor will be in office.

After the last Police Department employees move over to the new Public Services Building in July, the city hopes to recoup some of that money by selling the Roundhouse, along with the large surface lot next door.

Designed by architect Robert Geddes of GBQC and engineer August Komendant in 1959, the Police Headquarters is probably the most misunderstood building in Philadelphia, partly because an unfortunate fence, erected later, mars the view. Architecturally, its curving form is deeply sculptural. Think of it as Philadelphia's answer to Eero Saarinen's TWA building at New York's Kennedy Airport, now a boutique hotel. The Roundhouse is also a product of one of the most progressive periods in Philadelphia's history, when Mayors Joseph S. Clark and Richardson Dilworth were struggling to bring a declining industrial city into the modern age.

To make that happen, they knew Philadelphia needed to upgrade its civic infrastructure. They invested heavily in new libraries, health clinics, fire houses, and police stations, and went out of their way to hire the best architects of the day. After the Roundhouse was completed in 1963, the design was featured in an exhibit at New York's Museum of Modern Art.

Preservationists are now organizing to have the Roundhouse listed on the city's historic register, which would prevent it from being torn down after it is sold. A nomination was submitted in February. The Planning Commission has also agreed to hold community meetings before putting the building on the market. But given the Kenney administration's past treatment of the city's historic properties, the future of this important midcentury icon is by no means a sure thing.

It is hard to believe that the same city that realized such an aspirational civic statement as the Roundhouse could also produce such a mean and mingy interior at the Public Services Building. City officials told journalists last week that there are no plans to install a sign over the door. Maybe they're too embarrassed? This project isn't just a missed opportunity; it's a generational failure.